Circus News and What's On 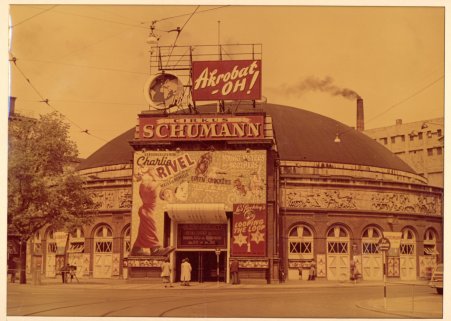 is a kingdom in north-western Europe, the southernmost of the Scandinavian countries. Denmark comprises of the Jutland peninsula as well as numerous islands in the Baltic and North seas. The principal islands, lying between Jutland and Sweden, are Zealand and Funen. Near the North American mainland, between the North Atlantic and the Arctic oceans, is the island of Greenland, home of Santa Claus and an integral part of the Danish monarchy. Greenland is internally self-governing. Excluding Greenland, Denmark has an area of 42,370 sq km (16,360 sq mi). The population of Denmark is aprox. 5,500,000. The capital and largest city is Copenhagen, on the island of Zealand, with a metropolitan area population of aprox. 1,400,000. Other major cities, with their estimated populations, include Aarhus (275,000), Odense (180,000) and Aalborg (160,000).

The circus season in Denmark usually begins in March and April and ends in August or September. Some circuses are also active with indoor performances in the winter season, including in the autumn holidays, up to Christmas and in the winter holidays.

In Denmark we have six circuses: the large Circus Arena, the medium-sized Circus Baldoni and Circus Trapez and the small Circus Arli and Circus Mascot. In addition, Søren Østergaard's Zirkus Nemo (a combination of a circus and a comedy show).  A seventh circus, the small Circus Krone, has not toured since 2018.

A number of foreign contemporary circuses are frequent visitors to Denmark. Canadian Cirque du Soleil visited Copenhagen July/August 2001 and has later been back in Denmark with arena-versions of some of their shows.

Some German family circuses have some seasons tried their luck in Denmark without attracting much audience. However, present Danish rules regarding e.g. technical documentation for tent construction and security will make it very costly for foreign tent circuses to visit Denmark. The present rules are due to a tent collapse in 2013.

Since 1991 The Copenhagen Circus Building has only occasionally been used for the purpose for which it was built in 1886. Swedish owned Walllmans Nöjen took over the Circus Building in January 2003. Since the building has undergone a modernization. The old stables now function as restaurant kitchen and banqueting rooms respectively, while the elephant hallway has been turned into the artists’ wardrobe. Wallmans use the building for dinner shows with singers, dancers and a few artists.

Facts about other Danish circuses

Facts about youth circuses in Denmark

Facts about this page

I will be happy to receive any comments you may have on this page, including corrections and proposal for amendments. Email me on circus@mail.tele.dk