and other Scandinavian countries

Special feature: It all happens in Paris (when relevant)

Circus during the Danish winter holidays. Usually you can see circus performances etc. in many venues all-over Denmark in the weeks 7 and 8, where the Danish schoolchildren have winter holidays. The children only have one week's holiday. Whether it is in week 7 or 8 is different from municipality to municipality. However there were due to corona restriction no such performances in 2021.

As the Danish corona restrictions look right now it will be possible to have performances with seated audiences. However, people over 15 must show coronapas, and people over 12 must wear face masks when not sitting down.

Due to this it is possible for Cirkus Trapez to offer winter circus in a number of Jutland arenas. You can find tour schedule and link to ticket booking at What’s on.

Look forward to the Winter Holiday as Circus Trapez invites you inside a number of Jutland arenas. You can see a completely new and magical performance for the whole family. Look forward to see among other acts several impressive aerial acts which are performed by the 2 beautiful young sisters Samantha and Chantal Lutzny. The young talented Joel is a gifted juggler and furthermore he presents an impressive chair balance act. The sweet and charming John makes the audience smile. Rene and Sabrina Lutzny present a cute and romantic partner acrobatics number, and Sabrina will also introduce you to her cute animals. Also experience fast-paced hula hoop, a male ventriloquist, fire-eating, dancing and much more. 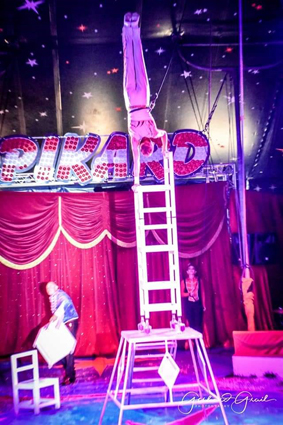 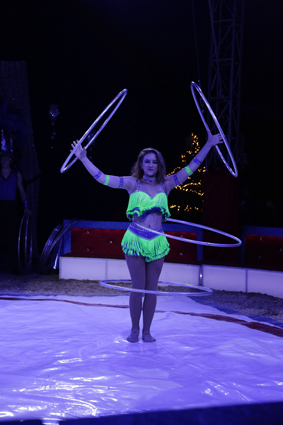 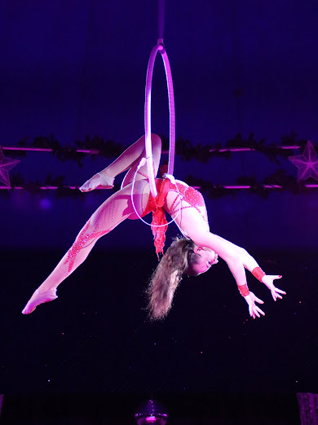 The Lutzny daughters can perform with hoops, both as hula hoops and in an aerial hoop (ring). Press photo from Circus Trapez

Members of the Lutzny family were part of the winter circus which Circus Trapez presented in February 2020. At the time, most of us belived that the corona was just something with China …

In 2020, Chantal and Samantha Litany appeared in a trapeze shaped like a cube. Samanta Lutzny also had a soap bubble entrée, and the at that time 14-year-old Joel Lutzny did a great chair balance with up to 8 chairs. The lower chair stood on 4 loose bottles, at a time of only 3. The Lutzny family comes from the German Circus Montana and has also performed in the Austrian Circus Picard. The Lutzny family also present their own Christmas circus together with the Spindler family: Klever Weihnachts Circus. The family consists of parents René and Sabrina, daughters Chantal and Samanta and sons Joel and John. 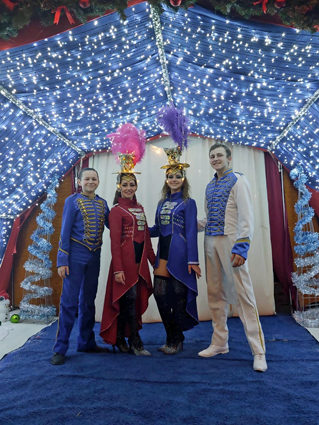 Children of the Lutzny family. Press photo from Circus Trapez

The winners at the Circus Festival in Budapest 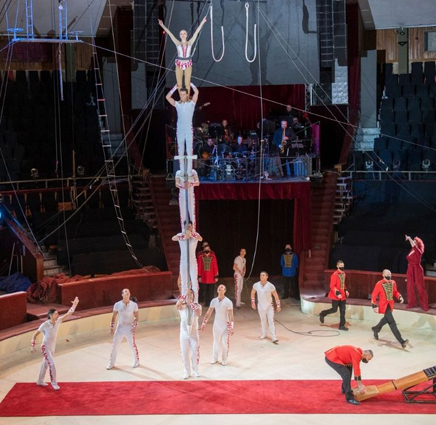 The special feature of the rock and roll performance of the group led by Kevin Richter, member of the world-famous Hungarian Richter circus dynasty, is that it mixes the Russian board performance with the Hungarian springboard show. 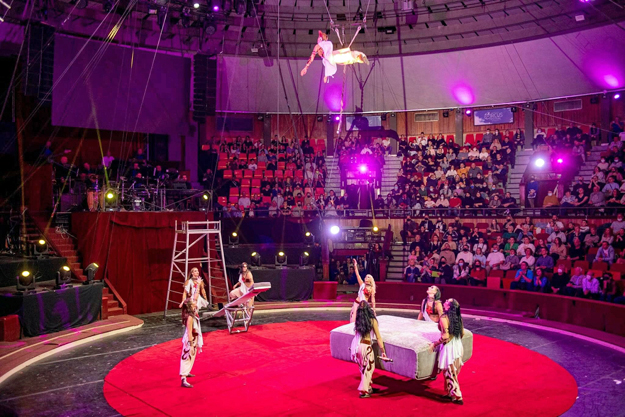 The board production Echo of Dreams was created in 2021 by Aleksey Zaripov, and was directed by Vitaly Logvinenko. One of the specialties of the Zaripov Group’s production is that since board performances are generally considered a male circus genre, in this case they are still performed by airy ladies. Photo: Kim Thanning Olsen 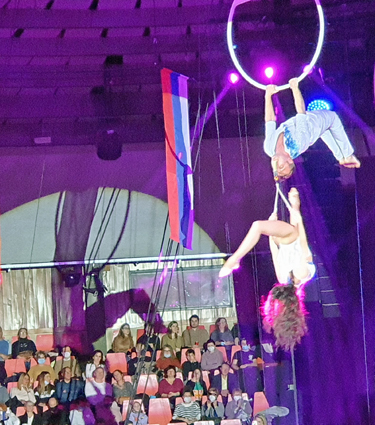 Oleksii Grigorov and Marina Glavatskikh are from Russia and Ukraine. Oleksii Grigorov’s career has started in 1996 with a duo trapeze show then entertained the audience with his solo wheel gymnastics (röhnrad) performance. After he met his future wife, they made their old dream come true and created their romantic, lyrical aerial hoop performance which they presented in the world’s most famous circuses, shows and variety shows. 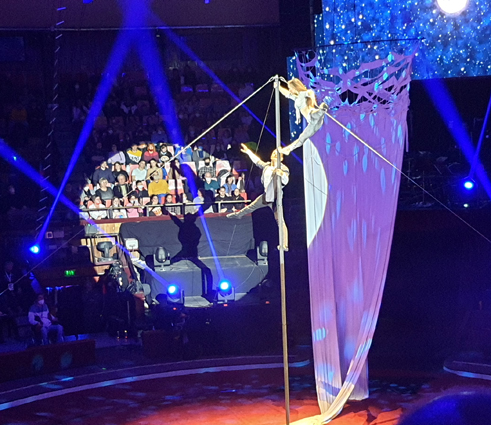 Mikhail Nikolayevich Ermakov is a member of a hundred-year-old Russian circus dynasty founded by his grandfather, Nikolai Andreevich Ermakov, who became world-famous as an animal trainer with his Dog School performance. Following his grandfather and father, Mikhail performs with his smart dogs. Photos: Jörgen Börsch 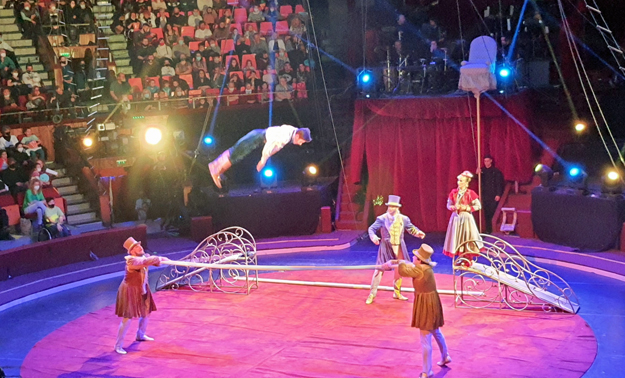 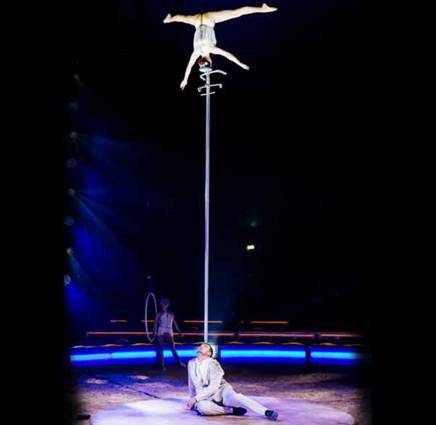 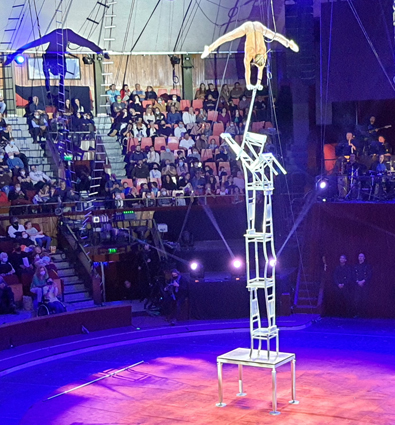 Lkhagva Ochir from Mongolia got the special award of the Budapest Prix. Photo: Jörgen Börsch

Special award of the jury of Hungarian Circus Directors: 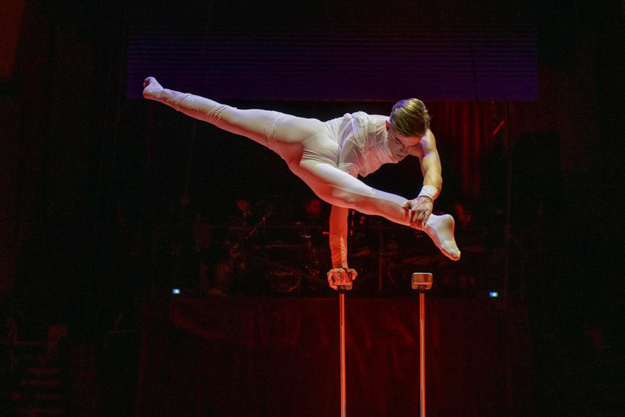 Danish Corona restrictions and circus - status. All circus, theater and cinema performances have due to a lockdown been cancelled through January 15th. From 16 January, performances with seated audiences can be resumed, however, with a participant ceiling of 500 people and requirement for use of face mask when not seated.

The number can be increased to 1,500 if the spectators are placed in clearly separated sections of a maximum of 500 people. The sections must have their own entrances and exits and their own service facilities.

The circus season in Denmark usually run from late March to September.

The Circus Museum's annual poster 2022. Many circus enthusiasts have a weakness for circus posters. In recent years, there have not been many new posters because many circuses use the same poster year after year. For poster collectors, it is therefore great that the Circus Museum in Hvidovre, Copenhagen, present a new poster every year. This year's poster has just arrived.

The museum writes (my translation):

We are proud to present the annual poster for 2022, which is made by the artist Martin Jørgensen, who i.e. has drawn Christmas calendars for both TV2 and DR and on a daily basis - next to his own works - illustrates everything from magazines and books to advertisements and storyboards. 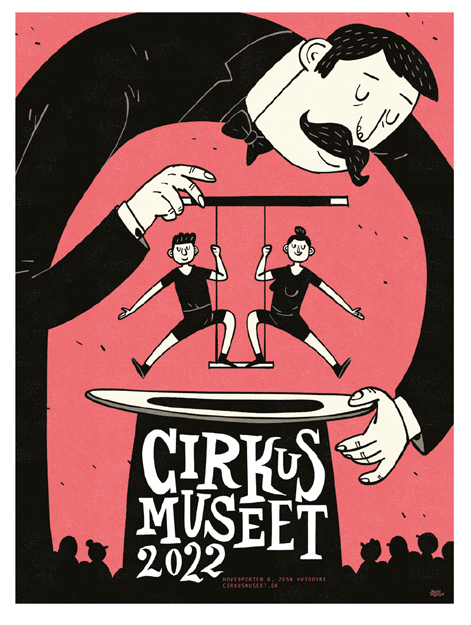 The poster measures 80 x 60 cm and costs DKK 50, - and can be bought in our shop or ordered via info@cirkusmuseet.dk (for shipping, the price is added a handling fee of DKK 35, - plus postage).

This year we have also chosen to print the poster in a high quality numbered and signed version in the size 30 x 40 cm, which will soon be ready from the printing house. This version is also signed by the artist.

Now Arena has released the names of a few more artists: the flying trapeze act Flying Wulber and the bouncing juggler Alan Sulc.

Flying Wulber was also with Arena in 2019. The year before, they were in German Circus Charlie Knie, where they also did a trampoline act. It is unknown at this time if this act also will be presented in Circus Arena. 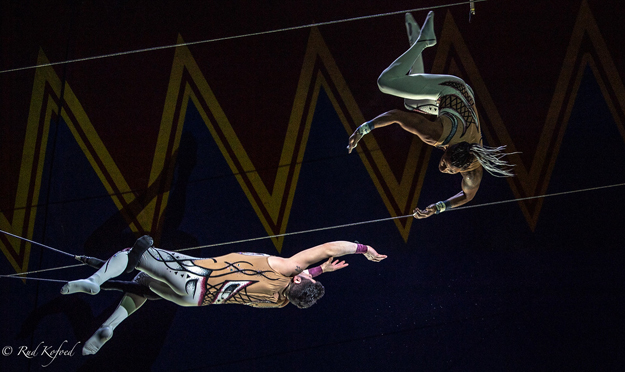 Alan Sulc was first time in Denmark in 2004, where he performed in Cirkus Benneweis. In 2019, he was with Circus Arli and was among the three artists nominated for the award for best act of the year. 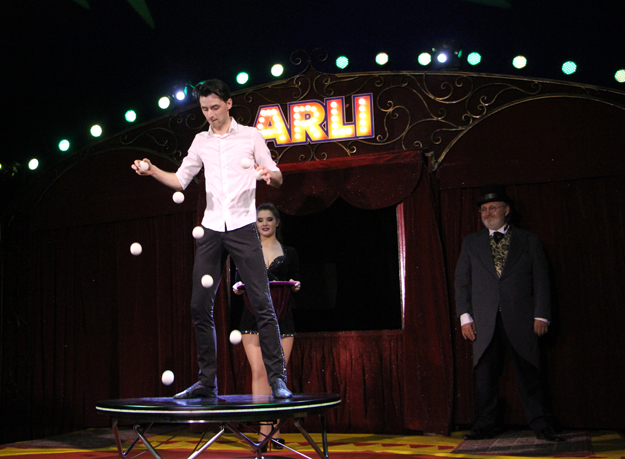 Alan Sulc at Arli in 2019. He was among the nominees for the award for best act of the year.

Danish Corona restrictions and circus - status. All circus performances etc. have due to a lockdown been cancelled until and including January 16th.

The Danish museums, including the Circus Museum in Hvidovre, Copenhagen, are also closed until 16 January. The circus museum in Rold is, as always, closed during the winter season.

DYNAMO is a stage and a workspace for contemporary circus and performing arts located in the middle of Denmark at Odense City Harbour.

The old warehouse provides with its 1300 m2 room for productions from national and international performers in a professional and creative environment,

In a New Year's letter, they write (my translation):

We hope you have a good start to the New Year! To the sound of the last firework we reflect on the past year:

The fall of 2021 is, for better or worse, a season we will remember.

We premiered a brand new co-production with Rapid Eye.

We had seven international and six Danish screenings and guest performances on the program.

We were nominated for the award “Odense of the Year”.

We have expanded our circle with more international networks.

We have entered into several local cooperations.

We built up and got ready for the big bang, ARCADE DELIGHT, and had to cancel the event at the just before the opening as coronary restrictions made it impossible to open the doors for the public. It hurt, but was not allowed to knock us out.

And then we received a grant from the The Danish Arts Foundation of DKK 3 million to continue our work for the next three years - a strong signal that they believes in DYNAMO as a national and international meeting point for contemporary circuses.

It is a huge gift that gives us motivation to work even harder towards becoming a firmly established contemporary circus house in the centre of Odense.

We are excited about the next season, which offers over 20 events/performances. We look forward to inviting you to circus, dance, physical theater, work in progress shows, children's shows, street theater and much, much more.

We sincerely hope we can reopen in mid-January!

We look forward to seeing you again

Danish circuses in 2022. Here is an overview in alphabetical order of the circuses which we hope to see on the Danish roads in 2022, as well as the planned opening dates. Of course, subject to corona-related changes.

Circus Arena: Season opening at Bellahoj in Copenhagen on 4 April. The performance will be presented by Bubber and Julie Berthelsen. 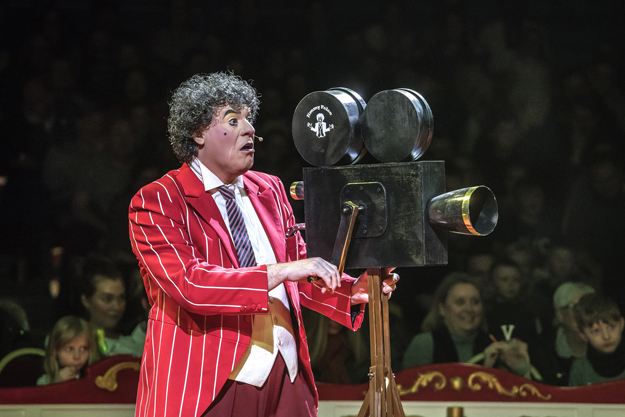 With a few exceptions, Jimmy Folco has been clowning in Arena's performances since 1997. Press photo from Circus Arena

Circus Arena’s theme part Circusland in Aarslev is next time open during the winter holidays 12 to 27 February. In the summer 2022 they plan to have concerts in the style of Tivoli's Friday rock every Friday night. Among those booked are Lars Lilholt Band on 1 July, Mads Langer on 15 July and Johnny Madsen Band on 22 July.

Circus Arli: Season opening in Fløng March 27. The names of the performers have not been released. 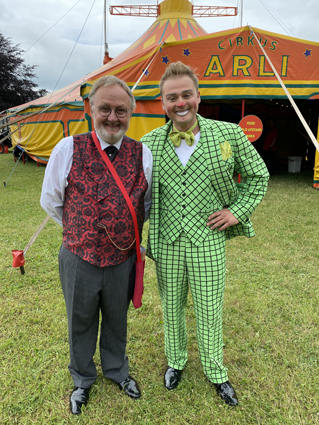 Martin Arli and his son Alexander are always among the main forces in Circus Arli.

Circus Baldoni: season opening in Hillerød 18 April. The director couple Camilla Frimann & René M. Baldoni say that Cirkus Baldoni in 2022 celebrates its 20th anniversary as they had their first season in 2002. “Our goal has always been to present the best show ever to you, which forms the foundation of our performance 2022, which will be the strongest show ever”. As in 2021, the ventriloquist Peter Nørgaard is ringmaster. This year, he is also put the performance on stage. Among the other performers are the versatile Janecek family as well as the bouncing juggler Line Caroll and her husband Stefan Platskov with ladder balance. They both starred in Baldoni's Christmas show 2020. Line, who is daughter of the clown Toto Chabri and Mrs. Nora, had in her debut with Circus Benneweis in the Circus Building in 1984. 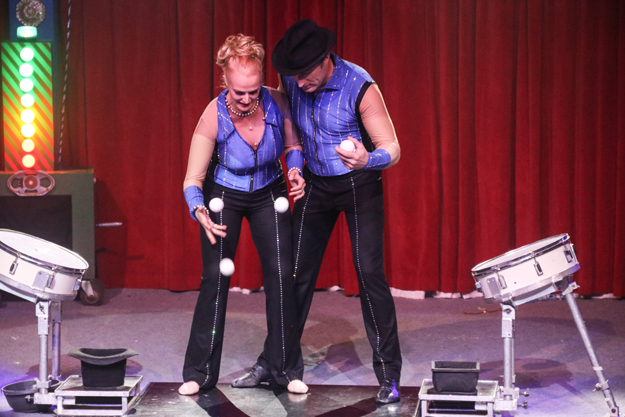 Circus Mascot: if possible season opening in Roslev at the end of March. In addition to members of the Deluran family and Clown Gulio and his family, the names of the cast have not been released. 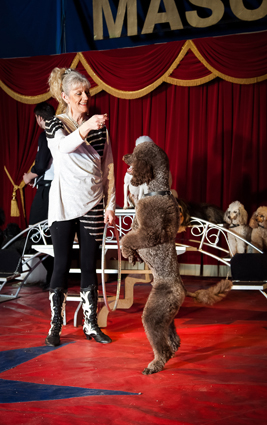 Marianne Deleuran and her playful doggies are an indispensable part of a Mascot show. Press photo from Circus Mascot

Zircus Nemo: season opening April 9 in Horsens. Apart from Søren Østergaard, the names of the performers have not been published. 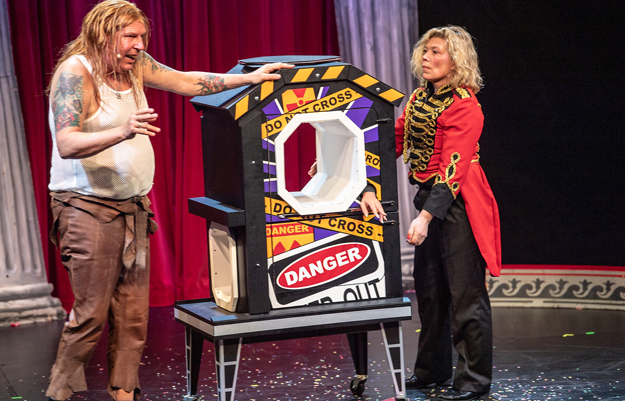 Although Zirkus Nemo offers excellent artists, it is first and foremost Søren Østergaard himself that the audience comes to see. Here as Smadremanden together with Søren's personal assistant Laura Kvist Poulsen. Photo from 2019. Photographer: Rud Kofoed / Ajour Press.

This website had approximately 26,000 visitors in 2021. The news section, being a weekly internet magazine and the tour list (“What’s on) are usually updated every Saturday. Apart from news and tour list the website has pages with facts about Danish circuses, Danish circus families etc. Links to those pages can be found at the bottom of the opening page