In 2004 8 tented circuses toured Denmark from late March/early April to September: 3 large: Circus Arena, Circus Ben­neweis and Circus Dannebrog and 5 dog and pony-shows (what Americans calls high grass circuses): Circus Arli, Circus Baldoni, Circus Charlie, Circus Krone and Circus Mascot. Despite a very rainy summer business for most of them was rather good - the best for several years. A German family circus, Circus Renz-Berlin, toured and the from June to August, however without attracting much audience. Often less than 50 persons saw their performances. It is very difficult for an unknown circus to do business in unless the have a large budget for marketing. And the Renz family had absolutely no money for marketing.

Some youth organisation produces circus-performances with kids as performers, using names as Circus Flik-Flak (probably the most established of the youth circuses).

Max Schumann passed away. According to www.circusnews.com Max Schumann passed away on , at the age of 88 in his native . From 1954 the famous Circus Schumann belonged to the brothers Albert (1915 - 2001) and Max (1916). Albert and Max were excellent horse trainers. Albert and Max presented liberty acts and Albert's wife Pauline rode high school and "Schumannship" became synonymous with horse acts being second to none. From 1977-1982 to Max Schumann travelled with his own circus called M. Schumann assisted by his children Katja (born 1949) and Philip (born 1953). After the circus closed Katja Schumann went to where she joined 's Big Apple Circus. Phillip left the circus business. Max Schumann himself presented his liberty horses in Danish Circus Arena in 1986 and in Danish Circus Dannebrog from 1987 to 1992. After the summer season 1992 Max Schumann joined his daughter at Big Apple Circus. Katja, Max and Katja's two children Katherine Schumann Binder and Max Schumann Binder were members of the Big Apple company until spring 2004. Max is survived by his wife Vivi whom he married in 1946. Max Schumann's funeral will be held on Wednesday, January 5th at from the in . Flowers can also be sent to the Schumann family's home: Philip Schumann, Baekvej 91, DK 8700 . 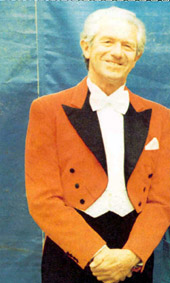 Exhibition about Arne Berdino. Curator Anja Olsen of the Circusmuseum at Hvidovre, has for a while wanted in 2005 to make a new exhibition about Arne Berdino Olsen. Arne Berdino was a performer at fair who established Danish Circus Arena in 1955. The circus which Arne's son Benny Berdino today have turned into the largest in the Nordic countries. As part of her research Anja Olsen on 22 December visited Benny Berdino at Circus Arena's winterquarter in Aarslev close to Slagelse. Benny told with great enthusiasm about his circus and its roots. Anja Olsen hopes to have the new exhibition ready before midsummer 2005. As Circus Arena was established in 1955 it can in 2005 celebrate its 50 years anniversary. 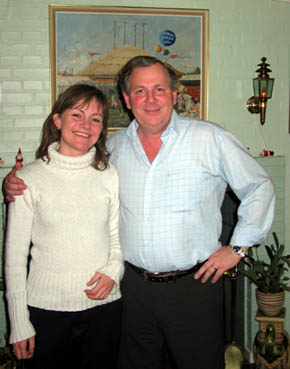 Seasons greetings from Kenny Quinn. "We wish you a merry Christmas and a happy new 2005 with a lot of good circus adventures" the Danish pickpocket artist Kenny Quinn and his partner and wife Joan writes. Their gentlemanthief entrée can for the time being be seen at 8. Gelsenkirchener Weinacthscircus in produced by Reinhard and Robert Probst. Local newspapers are very fond of Kenny's act calling him "Der Dieb auf Kopenhagen" (the thief from ).

Levade Noble Horse Gala 2005. In February 2004 Swedish Robert Bronett presented his horse show Levade Noble Horse Gala in . The show will be back again from 7 to with what is called the largest horse show in . During the shows Nordic tour in 2004 90,000 spectators saw the performance. In the 2005 performance there will be 52 horses, 30 riders and 8 dancers accompanied by a 9 piece live band. Among the performers will be Gaby Dew (repeater), Philip Astley (hardly the same person as Sergeant-Major Philip Astley who "invented" the modern circus some 240 years ago!), Kaiser Showteam (repeater) and Miguel Anchel with 8 riders and 18 Andalusian stallions. Ticketordering at BILLETnet. 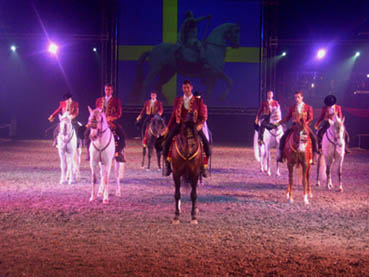 Janos Dubsky in . The Danish clown and dog-trainer Janos Dubsky (born 1971) who is the youngest son of the well-known clowns Joseph Dubsky and Josette Rivel (Dubsky-Rivel family) has since December 2003 performed with his soccer-playing boxers at Great Moscow Circus which is owned and produced by Australian impresario Michael Edgley. The tour started in . A Christmas greeting from Janos tells that Great Moscow Circus for the time being is in in . In the spring 2005 the show will visit a number of other cities in . Before Janos took over the act with the soccer-playing dogs from his sister and brother-in law Tina and Jan van Houselt he had for several years worked with his parents as the white-faced clown in Dubsky-Rivel family. 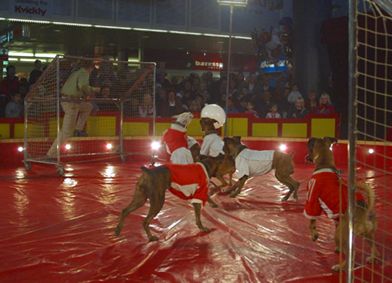 The magician and entertainer Niels Plys

have had a busy December: 16 days and 32 shows as the magical Christmas Elf at the Naestved Shopping Mall. New years eve he shall together with the musical entertainer Freddy Anthony entertain 700 people at the Danish holiday resort centre Lalandia. The honk horn playing Freddy Anthony is together with the German handstand acrobat Martina re-engaged for season 2005 in Lalandia together with Niels Plys who next summer can celebrate his 15 years anniversary as "showmaster " in Lalandia which is the largest holiday resort centre in