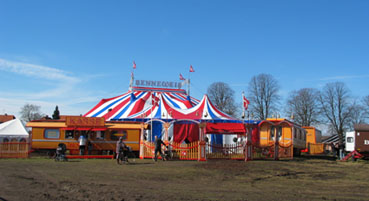 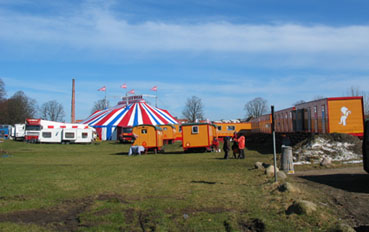 Late March to mid September Not touring since 2015.

A German musician August Wilhelm Binneweis (1839-1887) toured Denmark with a band called Braunschweiger Bergcapelle from 1858 to 1862. When the band was dissolved he stayed in Denmark where he married Charlotte Altenburg in 1865. Same year Charlotte gave birth to a son Gottfried (1865-1933). The family made their living as travelling musicians.

In 1887 Gottfried Binneweis married Marie Bruun (aprox. 1867-1935). Same year Gottfried Benneweis (the change of spelling might be due to a mistake in public registers) was granted permission from the police to perform as artist and musician and thus was circus Benneweis established. It has been on the roads ever since. No other circuses have been in the possession of the establishing family for more than 110 years!

Gottfried Benneweis died in 1933 and his eldest son Ferdinand Benneweis (1888-1945) became circus owner. In 1915 Ferdinand Benneweis married Irene Petersen (1891-1970) who had worked as performing artist with the circus since 1910. Ferdinand and Irene did not have children of their own. They took a foster child Eli (1911-1993) in 1916. Ferdinand had two children out of wedlock: a son Manfred Benneweis (1919 - 1987) who became a fine trainer of big cats and a daughter Musse Benneweis whose son Sonny Benneweis (1933 -1979) became an outstanding elephant trainer.

In Eli's will circus Benneweis was left to his and Eva's adopted daughter Diana Benneweis (born 1947) whose biological father was Manfred Benneweis. Thus has Diana been in charge of the show since 1994. After the 1995 season her two cousins the elephant trainer Kim Benneweis (born 1956) and the horse trainer Miller Benneweis (born 1958) (both of them sons of Sonny Benneweis) left the show apparently after some disagreements with Diana. It could be that they had hoped that Eli Benneweis in his will would have made them part owners of the show. Both Kim and Miller worked from 1997/1998 to 2002 for competing circus Arena. In 2002 Kim Benneweis was boss canvasman at Swedish Circus Scott. In 2004 and 2005 he assisted Diana Benneweis by staging the Benneweis performance. Miller Benneweis worked for part of season 2004 for Circus Dannebrog.

Diana has modernised the performance and although circus Arena today have a larger tent circus Benneweis is still the most established among the Danish circus presenting a fast-running international performance of high standard.